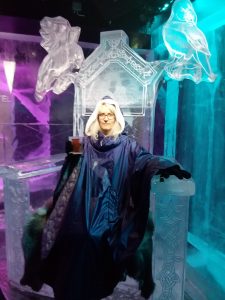 At the Ice Bar in Stockholm with its Viking themed carvings. Skål!

K.S. Barton writes historical fiction and fantasy stories of love and adventure set in the Viking age. The author of several novels, she explores themes of family, honor, and strength all within the backdrop of Norse society. When doing research on Norse mythology for a teaching project, she discovered the Norse sagas and decided that she wanted to write fiction about Vikings. She believes there is magic in storytelling and enjoys writing about family dynamics, explorations of love, bravery, betrayal, community, and the complex moral dilemmas that arise out of those issues. Of course, no story of Vikings would be complete without male warriors and fighting, so there is plenty of that in her books, too!

She has an M.A. in Humanities with a focus on literature and history and has always loved to learn about history through stories. Under the name Kim Barton, she wrote Aikido: My Path of Self-Discovery. She resides in sunny Southern Arizona.

I was recently on the Discovered Wordsmiths podcast as a panelist discussing story structures and frameworks!

This is the response I get most often when I tell people I write about Vikings.

It is pretty cool.

I’ve always loved stories, writing, and history. Although it took a long time to figure out, combining the three seemed like the natural thing to do.

How I ‘Discovered’ Vikings

Years ago, I wrote a companion book for the Harry Potter series. I spent years researching and writing it, and one of the areas of research was mythology. The first bit of mythology I researched for the book was Greek, which I already had a background in. With a BA in English and an MA in Humanities, I received a firm foundation in Greek mythology. It would have been hard not to learn about Greek mythology and its hero stories.

The thing that surprised me was my research into Norse mythology. I knew a little about the Norse gods, but not much. This was before all the Marvel movies came out and the Norse gods became crazy popular! Odin and Thor might have been household names, but the others were not. As I did my research, I discovered the Icelandic sagas and sagas of the kings.

I loved these stories and I made one other, more personal, discovery.

I felt that these stories were my stories. My ancestry. My birthright. It makes sense; my ancestry is Swedish and German. These were the stories of my ancestors, and it was fitting that I’d connect with them.

Why I Write About Viking Women and Families

In the classic novels about the Viking age, which were mostly written by men, the women were often either depicted as something to conquer, as shrewish wives, or as unfeeling and coldhearted. Even more disturbing, these women would sometimes be happy to have been kidnapped and stolen away by the dashing Viking warrior.

Then I noticed something. In these books with lots of manly fighting and surface feelings, there were references to woman’s emotions: one was taken against her will and even though it looked on the surface as if she were okay with it, there was a brief mention of the unfortunate woman trying to hang herself. When one woman’s child died, the mother would get a sentence or two about how much she grieved. There was one small story of a woman who was badly treated by men and wanted justice for the mistreatment. They were interesting stories, but all too brief. I wanted more. I wanted to dig into how they felt.

Even the men had their moments, limited as they were, of showing emotion. One adventurous Viking, a big, strong, tough chieftain was said to have nightmares about the time he was a galley slave. It was one paragraph. In some books, I’d read phrases like, ‘he was disheartened,’ or ‘he was cast down.’ Enough to show that the men did have feelings…not enough to satisfy me.

It was only a sentence here and then, little interstitial moments of emotions that got passed over. Except I noticed them. I wanted there to be more than a brief sentence or paragraph about how being taken as a slave would give a man nightmares or how a woman who had been brutally abducted from her home would feel about the experience. I wanted to examine how parents who lived in a time when babies died frequently would still grieve for that child.

I needed those moments to be explored and mined, not glanced over. I wanted to read about parents and children, brothers and sisters, and men and women…in relationship. That’s why I chose to write about these people who actually had emotions, who suffered and grieved and then recovered–to show their strength in the face of hardships, of which there were plenty.

It was important to me to portray the courage of a woman who enters into the birthing chamber knowing full well that she might die there and how that is every bit as brave as the man who stands in a shield wall.

To me, that’s where the magic is–in family dynamics, love, loss, bravery, grief, community, complex moral dilemmas, and how the stories we tell can guide us through life and give us strength.

Of course, no story of Vikings would be complete without male warriors and fighting, so there is plenty of that in my books. There is bloodshed and death and mayhem. It’s fun to write!

But because women and children are a crucial part of the story, it is also about those left behind when those men go off to cause death and mayhem. When we read books about swashbuckling Viking warriors who have no care for their lives because dying in battle is honorable and preferred, we don’t usually get the point of view of the women who lost their husbands, sons, fathers, and brothers.

That’s why I write what I do.

I was featured on the online magazine Shoutout Arizona!

Listen to my interview on Discovered Wordsmiths podcast. 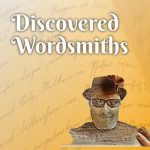