What do the Aesir gods do when they need help finding a cauldron big enough to hold all their ale? They call on Thor.

The gods of Asgard decided one day to hold a feast, but Aegir, the god who prepared the ale, told the other gods that he didn’t have a cauldron big enough to suit their needs. One god in particular (ahem, Thor) had a mighty appetite for food and drink, and it was difficult for Aegir to provide enough ale for him.

The gods knew of the very cauldron they wanted–it belonged to Tyr’s father, the giant Hymir (HEE-meer). It was a mile deep! Surely a cauldron that big would be big enough for the gods and their feast. So, Thor traveled to obtain this enormous cauldron from Hymir.

Hymir invited Thor for dinner. Hymir served three oxen and was surprised, and a little put-out, when Thor ate two entire oxen at the meal. Rude! Like I said, Thor has a big appetite.

The next day Hymir told Thor that if they were to eat again, they had to go fishing for more food, but Thor had to find his own bait. What did Thor do? He pulled the head off Hymir’s largest ox! Hymir was not amused or pleased. But they went fishing together anyway.

Thor took the oars and rowed out to sea. Hymir caught two whales, but then Thor rowed them even farther out to sea. Hymir, wisely, was afraid of Jormungandr, the Midgard Serpent, the serpent that wraps its body around the world.

Thor and Hymir stopped, and Thor placed his enormous bait on his fishing hook and cast off. Although Hymir did not know it, Thor wanted to catch Jormungandr. And he did. The giant serpent was caught on Thor’s hook, and as Thor dragged him up, the serpent thrashed and spit poison. Thor, with his considerable god strength, stretched out to brace his legs, and … they went right through the bottom of the boat and all the way to the ocean floor. Jormungandr continued to struggle and fight, so Thor pulled out his mighty hammer, Mjolnir, and began to beat the  serpent with it.

Then, all of a sudden, Hymir panicked and cut the line, allowing Jormungandr to break free. Jormungandr returned to the sea but held a lasting and fatal grudge against Thor.

Thor was upset with Hymir for cutting his line, so what does the god do? He throws Hymir overboard. Ouch. That hurt Hymir’s pride. When they arrived at shore, Thor carried the boat and the two whales that Hymir had caught back to the hall.

Hymir, feeling outwitted and undone, gave Thor his cauldron. But … only if Thor could carry it. Another challenge, and one that Thor was able to carry out with ease. He put the cauldron on his shoulders and strode away with it.

Thor brought the cauldron back to Asgard and gave it to Aegir. The cauldron was worth the effort. It was definitely big enough for all of the gods’ ale. They could drink all they wanted and the ale never ran out. 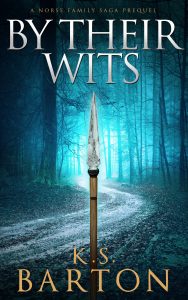